The only script of our planet’s past lies in landscape and rocks under our feet. They are the only places where you can trace processes and changes that had been shaping our planet for millions of years. The scripts saved in rocks and landscapes are unique and surprisingly fragile and when you destroy them, it is gone forever.

The indentation of relief landscape in the whole area of the park is considerate which is stressed by numerous deep erosion valleys with steep sides, mountain peaks and ridges. Among valleys following main creeks, the ones deeply cut are especially dominant – valleys belonging to the Bregana, the Lipovačka and Rudarska Gradna, the Kupčina and the Slapnica. The canyon of the river Slapnica is protected landscape because of its exceptional beauty and attractive process of forming gypsum on many locations. Apart of landscape resources of those valleys and water, some of them have waterfalls. The most famous are 40-meter-high waterfall Sopot near Sošice, waterfall Vranjački Slap, 15-meter-high Brisalo in the Slapnica valley and Cerinski Vir on the creek Javorački Potok. On waterfall Vranjački Slap in the Sopnica valley you can see partly ruined, but in some parts active gypsum barrier. 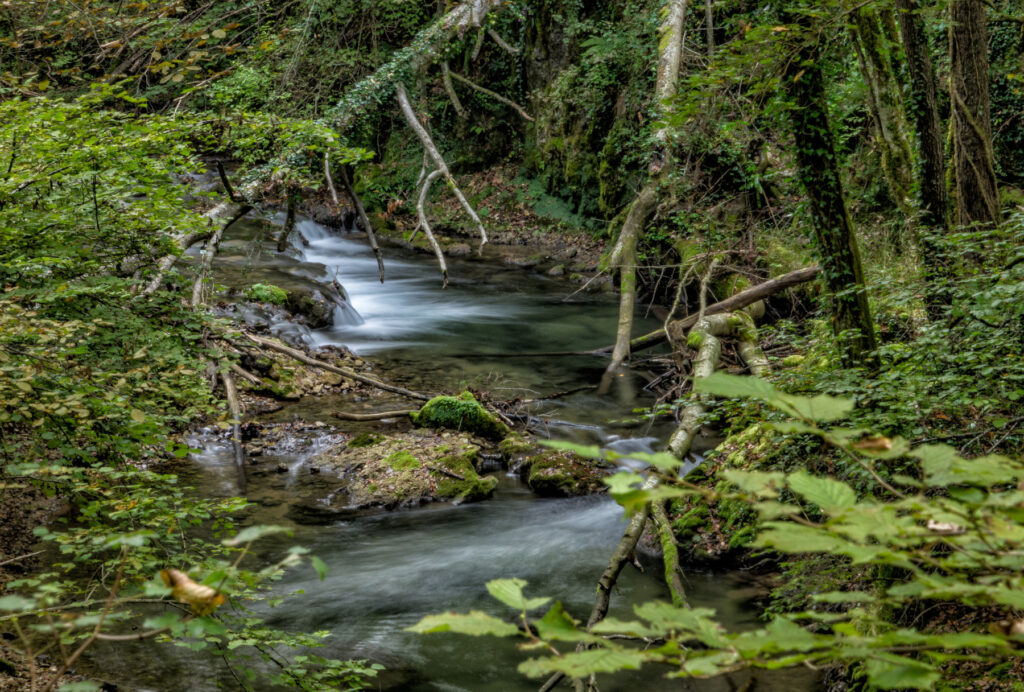 According to geotectonic structure, this area is on the border of so called Dinaric carbonate platform and Inner Dinarides, in other words of the Dinarides, the Panonian basin and the Alps. This is why natural and geographic features of Dinaric karst terrain and karst plateaus here interweave with the Pannonian plain with mild terraces and rivers together with sub-Alpine countryside with harsh ridges and crags.
The area of the Park is almost exclusively built of sedimentary rocks formed in prehistoric seas Tethysu and Paretethysu. Magmatic rocks appear on a small area between Plešivica and Samobor.

The area of Žumberak and the Samoborsko gorje has resulted from geological processes which can be traced according to sediment layers from the Paleozoic until today, in other words from those formed more than 250 million years ago to rocks which are forming even today. The largest area of terrain is covered with carbonates from the Trias (especially dolomites). The Jurassic is mostly represented in limestone, the Cretanceous in limestone and flysch and the Tertiary is rich in different classical facieses which are the result of strong tectonic activity with common changes in the surroundings of sedimentation. Clays, sand, gravel, gypsum and younger alluvial sediment of local rivers and creeks belong to the Quarternary period.
Such formation causes the karst which covers even 90% of the territory of the Park. Here you can see numerous karstic shapes like sink-holes, hollows and blind valleys. Abysses and short underground creeks are common, especially in the western part of the Park. Apart from karstic shapes on the surface of Žumberak and the part of the Samoborsko gorje, karstic features are highlighted by numerous underground shapes like caves and holes. Over 137 similar speleological shapes have been explored by nowadays. The deepest cave currently is Bedara which is more than 1020 meters long and 113 meters deep. The longest cave currently is Provala with 1892 meters of recorded channels.

The Park is extremely rich in water springs. Basic data for 847 water springs have been collected until present day. The biggest are springs of the Kupčina whose capacity is between 102 and 1500 l/s.

Among important traces of former life which can be found in the Park are fossils of died out ammonites, cephalopods on Gregurić Brijeg, fish, shells, sea-urchins as well as plant leftovers.